We are pleased to offer the second in our series of excerpts from Joel Mikell’s eBook, Crafting a Theology of Stewardship . . . and Why Your Church Needs One!, which lays out a framework for pastors and church leaders to develop a biblically based theology of stewardship and generosity. In today’s post, Joel discusses the second of seven perspectives presented in his book: Stewardship is not an end – it is a means to an end. People and ministry are the end.

Our second granddaughter, Addison, lost one of her baby teeth when she was four years old. The next morning after losing the tooth, she was delighted to find two crisp, one dollar bills under her pillow from the tooth fairy. When asked what she wanted to do with her newfound wealth, she surprised and delighted all of us by saying she wanted to give it to a sweet couple in our church that she loved to hug every Sunday morning.

The next week, at our Wednesday night fellowship supper (that’s what we call it in the south), she spotted the couple eating and literally skipped across the room to present her special gift to them. My wife and I watched with delight as she visited with the husband and wife and as she laid the two dollars on the table between them. It was soon clear that the conversation wasn’t going as Addison had planned for it to go. We watched as she slowly reached in and picked the money back up and with a sad face made her way back to the table where we were sitting.

When asked what had happened, she told us, “They said they didn’t need it, but that I should give it to the church.” (We found out later that the couple said what they said because they didn’t want to be accused of taking money from a child!). Both Donna and I, trying to make Addison feel better and trying to cover for the couple, said that we thought that was a great idea. We said that she could put it in the offering plate the very next Sunday.

People are not motivated to give to the church, but can be inspired to give through  the church when the goal is ministry and transformation in the hearts and lives of people. My wife and I give joyfully and generously to our church because we really want our giving to be an investment in ministry to people.

This was true in 2 Corinthians 8, where Paul tells the church in Corinth about the generosity of the Macedonians. He says that they gave beyond their ability and with overflowing joy because they wanted to “share in the ministry to the saints.” Paul states that they “urgently pleaded” for the “privilege” of giving. When is the last time you heard of someone urgently pleading for the privilege of giving? It happened there because ministry and people were the focus of the giving!

Stewardship is God’s business plan for funding ministry in the church. He entrusts to His people everything that is needed to accomplish everything He wants to accomplish – the gifts and blessings of time, talent, temple and treasure. He then invites us to return a portion of those blessings . . . to invest in what matters most to Him: people.

Christ died on the cross because of God’s desire to have a personal relationship with each of us. Christ died for people. He did not die for church buildings, programs or budgets. Resources follow relationships. Relationships are always about people. And stewardship is about relationships.

Questions to think about and discuss: 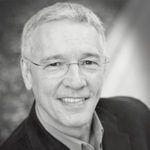 After 25 years in ministry as a pastor of worship and music in local churches, Joel has worked for organizations focused on stewardship and fundraising for more than 17 years, and has helped more than 150 churches raise over $600 million. He currently serves as senior vice president and partner with Horizons Stewardship. His passion for the ministry of stewardship comes from seeing churches experience profound spiritual growth and individual lives transformed through stewardship journeys built around prayer and scripture. He is author of Crafting a Theology of Stewardship and co-author of Church Giving Matters and The Ministry of Giving. A resident of Shelby, North Carolina, Joel and his wife, Donna, have three children and six grandchildren. In his spare time, he enjoys writing music, running, hunting, bass and fly-fishing and participating in outdoor activities of all kinds. Connect with Joel at www.horizons.net.