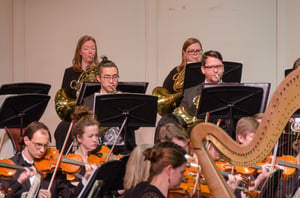 Community orchestras may not be as widespread as other community arts organizations, such as theater companies, but they can make important contributions in the lives of the people they serve.

Ann Meier Baker, National Endowment for the Arts director of music and opera wrote, “Community orchestras in the U.S. provide a great deal of musical, social, and civic value for their musicians and audiences, and for the broader community as well. In addition to their intrinsic value, community orchestras also provide value for professional orchestras that develop close relationships with them, thereby increasing their community impact.”

Like all community performance groups, funding is a big hurdle that must be cleared. But perhaps a bigger question is that of repertoire. Just how advanced are your instrumentalists? What level of piece can they legitimately perform. To borrow a phrase from the sports world, you’re only as good as your weakest link.

Some years ago, a community orchestra patron left a concert impressed because “they actually finished on the same note,” implying that had not always been the case. Obviously, community players are not at the level of the New York Philharmonic or the Chicago Symphony Orchestra, but neither are they the local middle school band. (In fact, middle school music teachers might be in the community orchestra.)

The size of your orchestra will go a long way toward determining which pieces will fall within your repertoire. You probably won’t be doing Beethoven’s Ninth Symphony, but if you do, be sure you have the full range of lush strings, horns, winds and percussion – not to mention a large chorus for “Ode to Joy.”

In fact, full symphonies are difficult to do. As one contributor to a message board wrote, “…Amateur orchestras can’t generally really play symphonies because their members don’t often have the time to practice their instrument needed to get the higher skill levels required to get the style and interpretation to the level that most people would consider to be playing what the composer intended.”

One workaround could be to perform only certain movements of symphonies, and choose portions that play to your group’s strengths. For example, Mozart and Schubert pieces have simple notes, but not much for trombones and four horns. Other suggestions ranged from Beethoven’s Fifth, Schubert’s Unfinished Symphony, Mendelssohn’s Fifth, Haydn’s Sturm und Drang symphonies and Dvorak’s Seventh.

Many community orchestras’ programs comprise shorter pieces, suites, overtures and the like. Some of the pieces listed by Jean Dubuisson in a blog for Violinist.com are from the operatic and ballet realm, including suites from Bizet’s “Carmen,” Mozart’s “The Magic Flute” and Tchaikovsky’s “Swan Lake” and “Romeo & Juliet.”

In community orchestras, especially, it’s important to spread the wealth. Most classical pieces are heavy on the strings, but, as Dubuisson writes, “our wind players want to play some of the melodies, so it cannot be one of those pieces where virtually all the melody is continually in the strings and the winds are just there to color things up or play a forte note here and there.”

Of course, community orchestras must select well-known pieces that will attract audiences, as well as that are within the range of their players. And, they must finish on the same note.