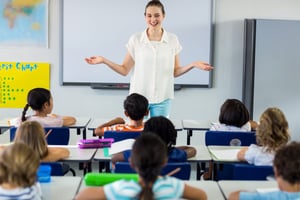 The week or two before school starts is a chance to renew old acquaintances, as teachers and staff members who have worked together for any number of years catch up on their summer activities and get ready for another go-round.

But every year, new teachers and staffers come aboard who need to be initiated into the club, so to speak. The newbies have to learn the school’s culture, its traditions and how to navigate the campus – both geographically and politically. Most of all, new staff must get to know their colleagues, with whom they’ll be working closely for the foreseeable future.

Education World and other sources, through a series of articles, published several ideas that have been utilized successfully not only in school settings, but also in corporate and other environments.

You’re not looking for things; you’re looking for information in these exercises, conducted at the first full-staff meeting. Pass out name tags and a list of anywhere from 25-35 items that must be discovered in a certain time frame – maybe 20-45 minutes, depending on how much time you have.

Everyone mingles around the room, asking questions of their colleagues and checking items off the list when they find the person who matches the item. Some items might be “speaks five languages fluently,” or “has swam against Michael Phelps.”

Make sure not to allow “cheating.” No questions such as, “Did you do anything on the list?” And try to discourage people from getting easy check-offs from only their close colleagues. That’s why many managers divide groups into teams for these activities – to avoid easy pickins

No, you don’t have to travel to some barren tropical island and subsist on twigs and wild berries in the school staff version of the popular CBS reality show.

One school’s version lasted the entire school year and started before classes began. At a Survivor-like staff meeting – where macaroons, trail mix and punch were served – teachers separated into class “tribes” and chose a name – either an original one or one from the TV show. They also picked colors for it students T-shirts.

The training ended with an eating contest, with foods such as sardines, pigs’ feet, jalapeno peppers and the like. Teachers who were willing to undertake the challenge received points for their teams. And no one was voted off any island.

The teams undertook monthly challenges, earning points through the end of the school year.

Though that was a full-year activity that involved students, another school used the “Survivor” theme to break the ice on a staff in-service day. Teachers were led into a dark room filled with dry-ice-created smoke, tiki torches, ropes and replicas of Survivor logos. Support staff, dressed in tribal gear, divided everyone into five “tribes,” gave them a box of art supplies and told how they could earn tribal bucks.

Meanwhile administrators (or “chiefs” on this day) would be watching for rule violations. The tribes competed in various challenges throughout the day, ranging from mental to physical. Lunch came right out of Survivor – clear broth, bun, water and extras that could be bought with tribal bucks.

Afterward, the staff gathered – as one again – to discuss what had happened. Disclaimer: although camaraderie developed among tribemates, the author of the piece said the teachers basically spent the day in “an environment that was the direct opposite of a quality learning environment,” where winners were celebrated and losers humiliated.

Welcoming new teachers and staff shouldn’t be just a one-day or one-week activity. It can go on all year, with the assumption that the new staffer will be around for a while. Some ideas:

Starting a new job is always awkward, but getting to know your new co-workers in fun ways can always break the ice well and make people feel at home more quickly.

AP Exams Advanced Placement Trend Debate: Public vs Private Schools The number of schools offering Advanced Placement courses and the number of students taking them were at an all-time high in the 2016-17 school year. …
Read More
Education The Top 5 Management Priorities for School Administrators School management teams, including each school administrator, need to recognize their roles in the educational system and be able to prioritize …
Read More

AP Exams Advanced Placement Trend Debate: Public vs Private Schools The number of schools offering Advanced Placement courses and the number of students taking them were at an all-time high in the 2016-17 school year. …
Read More
Education The Top 5 Management Priorities for School Administrators School management teams, including each school administrator, need to recognize their roles in the educational system and be able to prioritize …
Read More