Tips for a Harmonious Band Camp 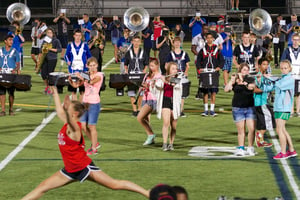 The sounds of mid- to late August will soon be heard across the nation. Coaches’ whistles and young athletes’ grunts will mark the start of high school football practice. Meanwhile the rat-a-tat-tat of the drumline and the unmistakable melody of the horns will herald the 2018 edition of marching band camp.

While anyone who is involved in band knows it is a yearlong activity and commitment, they also know that band camp signifies the beginning of the most exciting – and taxing – season of that year. 7 a.m. rehearsals; Friday night halftime shows followed by daylong Saturday competitions. But band camp is the time when everybody gets back together, new drum majors take the reins and new freshmen are initiated into the ranks.

Band camp can be a fun, productive couple of weeks…or it can be a disaster. Here are some tips for creating a positive experience that will set the tone for a successful season:

Then, of course, there are the newest members of the band: the freshmen. They might have had some exposure to the high school band during their eighth-grade year, but now they’re at the bottom of the totem pole. Virtual Music Office had some tips for freshman band members that may also help band directors and staff understand what these ninth-graders need to know:

Heeding these tips will help make band camp a smooth, productive and enjoyable experience – and increase the chances for a harmonious season to come.